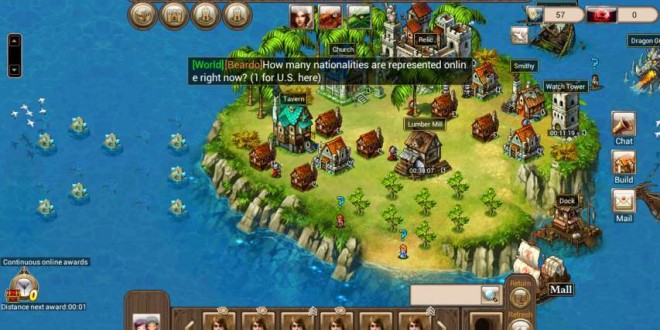 If you are been a fan of simulation games and have had a good time with popular Facebook titles like CityVille and FarmVille, there’s no explanation to why simulation based games are highly addictive and eat up all your free time. Though there are loads and loads of such games available for android today but often lack the potential and depth seen on similar PC and Facebook flash games. Fortunately Dragon Kingdom is not just another simulation and strategy game. With a punch of fiction and fantasies the game takes you far away in the world of dragons craving for flesh while the rebel pirates are ready to throw attacks on you but you are in search of treasures, building your kingdom and conquering islands to expand your resources as well as army.  With a nice balance and mix of real time strategies, RPG’s and very well integrated social experience in the game it’s hard not to enjoy every bit of the game.

The beginning can be quite boring as you would want to skip simultaneous pop-up’s that try to teach you the basics of the game but the long training mode is well worth the fun in long run and comes to an end as you reach level four and that’s where you start building and expanding your kingdom on your own.  The map view will give you a clear understanding of where you stand and who you have as your neighbor’s on the nearby islands operated by other players just like you.

Just like you imagine a kingdom with a variety of characters, traditional buildings and businesses being carried out by civilians, Dragon Kingdom is an enchanting virtual world you own and continuously strive to build new structures like church, farmhouses, mills; create and train soldiers, fight battles, solve quests and expand your kingdom by occupying or raiding neighboring islands. You will also harvest trees for timber, sea ores and obtain sea food to cater to the needs of ever-growing demand and development of the kingdom. The variety of challenges in the game are termed as Quests and the interface shows your primary goals to guide you along with hints and tips that are a part of the checklist and let you understand new elements in the game, go out for a battle, train your soldiers, upgrade buildings and so on.

The simple game strategies turn to get more difficult as you advance to higher levels that require creation of bigger and more developed structures. Patience and timely moves will be the key to progress at higher levels or you may need to spend some of your dragon coins that can instantly complete or speed up the progress. With Dragon Kingdom, you got be social if you need to earn some free benefits. Social activities like requesting a friendly speed boost from friends or from new gamers over the chat is as much fun as giving them back in need. What’s even exciting is sneaking into a friends island to steal their resources when they are away from their island or rather away from the online game. Try and trade some resources for speed boost you can offer them and the mutual benefit will take you way ahead of your common enemies. Either ways the social aspect in gaming is really amazing. You can also chat with millions of other gamers through the world IM channel in the game or start group chat or even better a private chat when you are planning a silent attack on one of your enemy kingdom.  The game progress is linked and saved on your Facebook profile but you’ll need to have an uninterrupted data connection to play Dragon Kingdom. There even more you can do on the social space right from bragging your achievements, updating your Facebook status, requesting your Facebook friends to join you as friends in the game, upload photos and check-in directly from within the game.

The depth in the game, the variety and realism is what makes it really unique and way ahead of other real time strategy games. The graphics are not the best in class but are really lively and colorful; moreover they hardly give you a reason to complaint about. The effective utilization of screen estate is another reason that fine tunes the smooth gameplay and fit the most it can, making every section accessible without digging too much. Though the only thing that the game sacrifices is the bigger, much clearer action buttons and text to accommodate and present everything in way gamers are used to but it’s a fair deal and gamers would hardly experience any navigation issues after getting used to them.  The notifications, status updates in game and progress is all shown in a very neat way and not for even once did we notice a glitch in the UI or touch.

If you are simulation or strategy game lover it, Dragon Kingdom comes to you as treat for free but if you are someone who isn’t much into this genre, give it a try and you won’t regret to have it in your game collection.